All About Sammy's Place

This site is a continuation of some projects when I was a director of IT in Florida. The purpose of Sammy's Place was not just for fun but to provide a site for teachers to find jobs in elementary and secondary education in Florida. The quotes and language notes are due to my background and interests. Success in your job searching! Remember to look the interviewer(s) in the eyes when in the US of A, you are not overseas.

Dogs are really just little people in fur coats. Sammy was a cuddly little basset, checking in at just over 72 pounds. Sammy lived a long and happy life in Florida. Sammy was the first basset with his own web page - ever since Al Gore invented the Internet. Sammy's home page was launched in 1995. Sammy was the sheriff in the neighborhood, keeping an eye on deer, turkeys, an occasional coyote and bobcat, squirrels, chipmunks and armadillos. Sammy contracted pancreatic cancer. He is sorely missed.

A friendly little girl basset, Maggie, then kept an eye on Sammy's Place. Small for a basset, Maggie still hit the scales at 38 pounds but no one told her that, she was sensitive about her girlish figure. Maggie launched the first ever basset-operated election site of Florida counties as a test. Here is Miss Maggie in all her glory on her first birthday. She was having a blast, Maggie contracted Stage Va B-cell Lymphoma in 2012. The good doctors, and technicians of the Oncology Department at the College of Veterinary Medicine at Auburn University in Auburn, Alabama gave us three more years with Maggie. Maggie was as gentle as a lamb. She had two "not always the best of" friends: Boots, a tuxedo cat, (black and white of course) and Pepper, a long-haired black and white curmudgeon of a cat. The three would walk the trails together. All three are now gone. 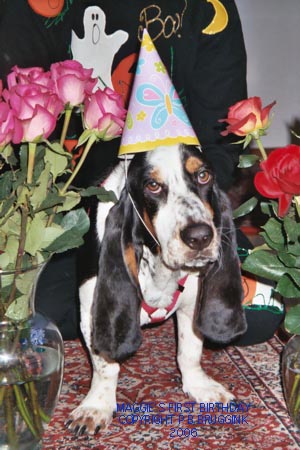 A third basset then guarded the gates, a feisty tomboy, Miesje. At 18 months, she tipped the scales at 58 pounds. Nothing phases her. She's a bruiser, her parents were Jack's Honey and The Sundance Kid. The Sundance Kid genes came out in Miesje, she'd steal a napkin, a sock on the floor, a roll of toilet paper in a flash. And then the game was on, chased around the house. Unfortunately, a rare tumor developed in her throat and despite the best efforts of Dr. Bob Martin in Dothan, AL, we had to let her go.

Now we have a fourth basset guarding the gates, Snoepje. At 18 months , she tips the scales at 71 pounds. And she is the cousin [in the basset world] of Miesje. They had the same grandfather 'Kraken', from Russia.